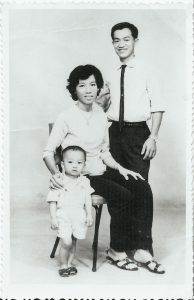 Vincent Lee (Chinese name: 李騰輝 Lee Teng Huy) was born and grew up in Phnom Penh, Cambodia. Vincent’s parents were both ethnic Chinese-Cambodian. Like many of his Cambodian generation, from April 17, 1975, when the Pol Pot’s Khmer Rouge seized control of Phnom Penh, Vincent was taken away from his family at the age of ten to join a labour camp for boys and endured four years of brutality and starvation. Vincent was one of the luckiest survivors of the greatest genocide in Cambodian history under the regime.
In 1980, Vincent escaped with his Grandmother, risking his life across Cambodia jungle of landmines into the refugee camp in Thailand. Vincent arrived in Sydney, Australia, in 1981 under the Refugee and Special Humanitarian Program.

In 1982, he began sustained formal education for the first time at the Christian Brother’s school in Sydney. He cleaned classrooms and worked at night to pay his school fees, and combined works and studies to complete his degree at Sydney University in 1991. He also holds a master degree in Finance from the University of Technology, Sydney. Today, he lives in Tokyo, Japan.Vincent has recently written his Memoir, Father Missed His Plane, about his survival experience under the Khmer Rouge regime and life as a refugee. In his Memoir, Father Missed His Plane, he provides insights into the mind-boggling question “Why?” of that terrible period. The book was released in February 2017.