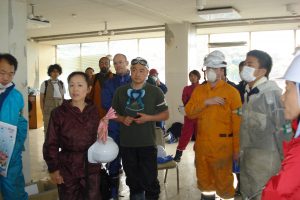 In the Japanese city of Ishinomaki, signs saying “Can the surviving owners of this house please contact the volunteer center” are still commonplace. Ishinomaki, which is in Miyagi Prefecture about 430 kilometers north of Tokyo, was among the areas hit hardest by the 9.0 magnitude earthquake and nearly 15-meter-high tsunami in March. Three months later, many of its estimated 164,294 population are still unaccounted for. The continuing tragedy moved Vincent Lee (at left) to organize volunteers for a train trip to Ishinomaki. On the weekend of May 28-29, he and nine other Thomson Reuters Markets Tokyo employees — Marcus Bagshaw, Yumi Hasegawa, Kayoko Ishihara, Ikuko Kanno, Mai Kato, Yumiko Miyano, Junko Ogura, Machiko Sasaki and Maki Suban — set out to do what they could. With just their work gear on their backs and a passion to help, they removed rubble, broken doors and furniture and cleaned stagnant sea water and mud from the nooks and crannies of houses. The work was hard; it gave the volunteers a sense of the challenges people in the devastated areas are up against as they struggle to rebuild their homes and lives. The weekend also turned into a team-building exercise when the Markets volunteers discovered that some of the other volunteers worked for important Thomson Reuters global clients. The groups inspired one another with their work.
The following weekend (June 4-5), two more Markets employees — Hiroaki Kamahori and Madoka Miyagi — made their own trip to Ishiinomaki. Their reaction: “We could not see the view of the tsunami-destroyed town without tears.” However, Vincent noted, their “tears turned into sweat and sweat swept away the rubble and cleaned those broken homes.”

It will be years before the towns and villages devastated by the earthquake and tsunami return to anything approaching ormalcy. Weekend volunteers will be needed for a very long time and everyone is encouraged to join in. Vincent is planning his third trip with another team from Thomson Reuters Japan on June 25-26. Contact him if you’re able to come along.