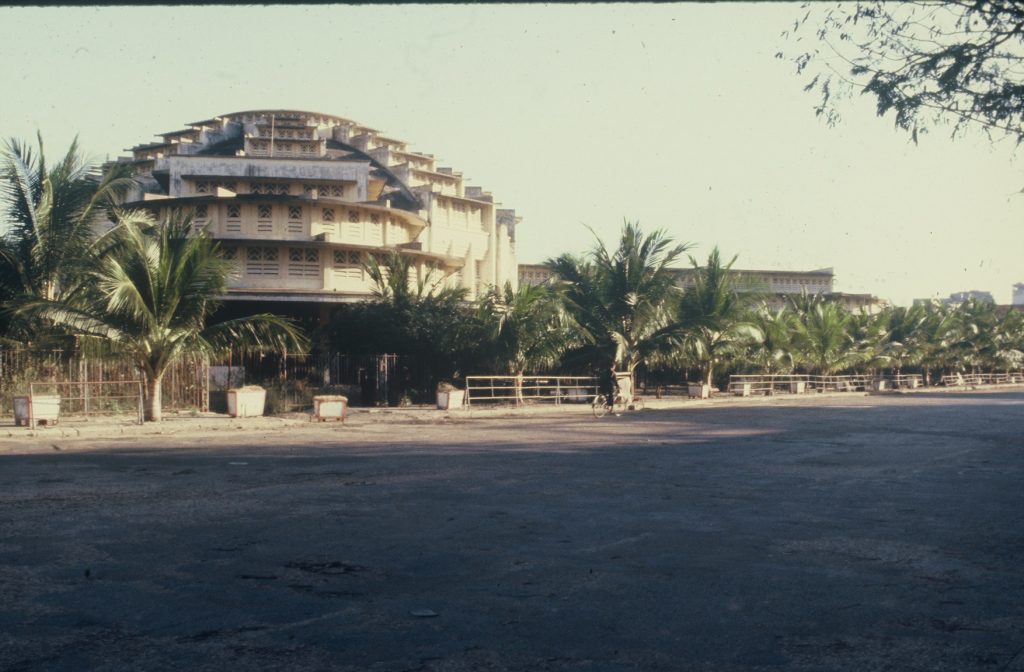 The Ghost Town. It was all too quiet. I wanted to feel the energy that used to light up the city at night just a few years before. Phnom Penh had been a place overflowing with life, full of markets and tinkling bell from passing ice cream rickshaws, the yodel of Khmer women selling noodles, the shouting of hawkers, the raised voices of Chinese merchants making deals, even the garbage man’s howl: “Anyone have an empty bottle to sell? Eleee!”

I wanted these sweet sounds again, I wanted life to return. I wanted to hear the noises of people setting up the market in the morning, the cyclo-rickshaw riders dropping off their deliveries with a raucous cling-cling of their bicycle bells. I longed to see the stall holders lighting their cooking fires. In one corner of the market fisherman’s wives used to line up with buckets of live fish caught only hours earlier. They’d loudly compete against each other to sell the fish before they died, because once dead they’d have to discount the price heavily. Villagers would bring in fresh fruit and vegetables every morning. Butchers would prepare pork and beef overnight, while chickens and ducks would be still alive. Every now and again a rooster would crow loudly and echo across the market: Coo Coo Cooooo.
Phnom Penh had been the most beautiful city, our capital and a jewel of Asia, but now it was reduced to nothing. Not even ghosts walked around the dead city. It was a city of ruins. Grass and weeds had conquered, the shops were empty and the houses had no soul. No one had tended Phnom Penh for four years. Amongst the decay and dilapidation, the only new things visible were Vietnamese barbed wire barricades.